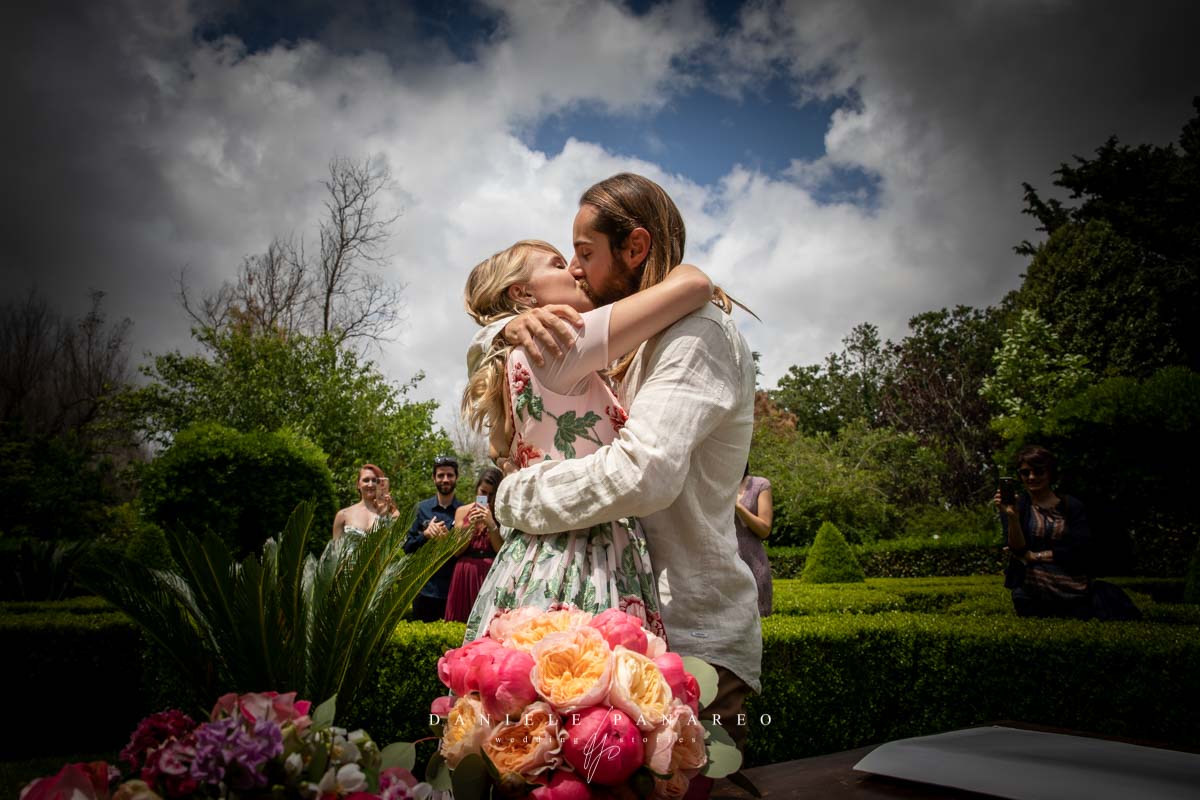 Posted at 16:35h in Blog di Matrimonio by Daniele
Share

Elopement photographer Daniele Panareo would love to hear from you if you are planning an event that might be a mini, civil ceremony, informal, outdoor, or another type of non-traditional wedding. The following small wedding took place in La Cutura Botanical Garden, Lecce, Puglia, but Daniele is available for intimate events in or around Amalfi Coast, Campania, and Sicily.

The group of people, including the newlyweds, arrived at the location with a van. They decided to take the long paths that lead from the parking lot to the area designated for the ceremony, the Italian gardens. I had been waiting for them inside the structure for a long time and when I saw them popping up at the end of the avenue I was struck by this scene. They looked like the protagonists of an epic film that traveled the stretch of road that would lead them to the place of their enterprise.

Elisabeth and Stefano love nature and come from far away. She from Australia and he from Brazil, fell in love with Italy and their dream was to visit it.

One original and free wedding in Puglia

They decided to invite their families and closest friends to their wedding in Puglia. In all, they were ten people.

In May, with a van, they reached Lecce and then La Cutura, the location chosen for their wedding ceremony. La Cutura is a botanical garden known above all for its woods and large greenhouses with succulents from all over the world. This structure is surrounded by greenery and it is a pleasure to walk the paths to discover enchanting views.

The spouses are on the site of the civil ceremony. Wedding ceremony was chaired by the mayor of the nearby town of Giuggianello and by the celebrant who translated from Italian into English and Portuguese. There was no way to get past the hedges that surrounded the ceremony site, so the bride and groom asked for a staircase and in a few minutes the workers of the structure created a bridge with two stairs and a table. Very ingenious and nice solution to tell. Also in this image, I preferred a central perspective to connect to the previous one in which the characters were introduced.

All around the place chosen to celebrate the wedding, the eight guests were arranged. We were outdoors, on a beautiful sunny day and some of them put themselves in a place where there was shade. In the photo we see a detail of the two mothers of the spouses, as well as wedding witnesses. The moment was about to begin during which the spouses exchange promises and the mothers were moved. At one point the two women looked at each other with tears in their eyes and Elisabeth’s mother tightly and warmly squeezed the wrist of Stefano’s mother who could not stop crying.

My vision of elopement photographer in Puglia

The spouses had written their promises on the phone and decided to whisper them without the help of the microphone. Very intimate and exciting things were said. In the background, Stefano’s dad and the other guests are watching the scene carefully.

The wedding ceremony ended with a passionate kiss and a very strong hug between the two new spouses.

The brief refreshment took place inside the holm oak forest. Stefano’s dad made a speech in Portuguese, later translated by his son, and uncorked a bottle of prosecco. I try to offer my point of view like elopement photographer in Puglia

After a short walk through the gardens, we arrived at the enchanted farm, another beautiful location. Here Stefano’s mother gave the necklace that belonged to her mother to his son’s wife. It was a very moving moment because Elisabeth did not expect such an important gift.

Another moment of intimacy captured by the elopement photographer in Puglia Daniele Panareo. Elisabeth hugs Stefano’s mom after a public speech. A very moving and particular moment.

Here we are in the greenhouse of Latin American succulents. The spouses chose this place for a relaxing walk after the ceremony. All the other guests had moved and the couple was left alone. I also wanted to leave their intimacy but I made some shots from the outside.

For the whole article go to WPJA page of the elopement photographer in Puglia Daniele Panareo.

This website uses cookies to improve your experience while you navigate through the website. Out of these, the cookies that are categorized as necessary are stored on your browser as they are essential for the working of basic functionalities of the website. We also use third-party cookies that help us analyze and understand how you use this website. These cookies will be stored in your browser only with your consent. You also have the option to opt-out of these cookies. But opting out of some of these cookies may affect your browsing experience.
Necessary Sempre abilitato
Necessary cookies are absolutely essential for the website to function properly. This category only includes cookies that ensures basic functionalities and security features of the website. These cookies do not store any personal information.
Non-necessary
Any cookies that may not be particularly necessary for the website to function and is used specifically to collect user personal data via analytics, ads, other embedded contents are termed as non-necessary cookies. It is mandatory to procure user consent prior to running these cookies on your website.
ACCETTA E SALVA